Were You Able to Buy a Super NES Classic on ThinkGeek Today?

Were You Able to Buy a Super NES (SNES) Classic on ThinkGeek Today?

Posted 10/11/17
If you’re like me, you have been trying to get your hands on the new Super Nintendo Classic since preorders were available. If you’re REALLY like me, you still don’t have one, and you refuse to pay anything over $79.99 for it (well, maybe some shipping costs). ThinkGeek yesterday into this afternoon had been telling us they would be getting some in stock. So I had my account setup to order, waited and kept their Twitter feed and product page…the second I got the tweet (which was the second they posted it) I was on their site refreshing the product page, and what did I see? A “503 Service Unavailable Error” that continued until I saw their Tweet that they had sold out (within 3 minutes or so).

Confession: I Was Never a ThinkGeek Customer

I’ve never purchased anything from ThinkGeek in my life. I know a few people who have, but I never felt the need to shop there. I like their stuff, mostly… but some things are way overpriced, and I know I can buy other things elsewhere…so I never bothered with them. I suppose it’s nice that sometimes they get things in stock, for a moment, when other stores are out. To be that “big” of a website, I mean, with that many followers and not have a decent site setup to handle the audience – or fair ordering process – is unforgivable. It could be that they were hit with scripts or bots that auto purchased these SNES systems before anyone else could. Or they legit sold out with real customers (some people claim they never got the 503 error and were able to buy some). Either way the site broke and there are a lot of angry would be customers, some who even had this Super Nintendo in their cart but by the time they clicked the “Buy” button it had vanished from their cart or they got the 503 message.

So Where Can We Find This SNES Classic System Before Christmas?

What’s a slow older regular gamer who works a full time job to do? Personally I will keep waiting, I refuse to pay the 200 or more price gouging price for this system from scalpers/resellers that have flooded eBay, Amazon and Facebook Marketplace. Right now the cheapest place I can actually find it is on Amazon here: 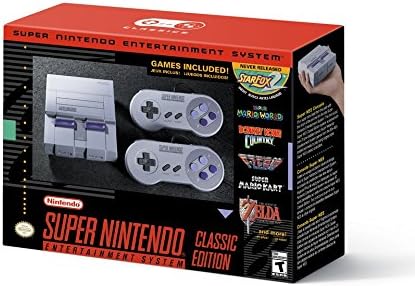 Which (as of right now) is a good $90 over the MSRP of $79.99, over twice the cost these sellers paid. On eBay I’ve seen them selling for $200 or more. Maybe if I had a kid who really wanted one and that’s all they wanted this Christmas I’d suck it up and pay to get it for them… but for me, I can wait until I can get it cheaper – or never buy this at all. I mean, we can find a real SNES with games for far less money. It just won’t come with StarFox 2…

Care to vent your frustration on this topic?
Leave a comment!